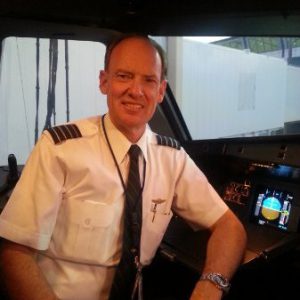 Rick joins AirplanesUSA from the Los Angeles area where he worked at Torrance airport in his teens at an aircraft maintenance shop and soloed at the age of 16.

He continued to fly a wide variety of single engine aircraft there until graduating from UCLA and moving to Alaska in 1976. He went on to fly commercially in multi-engine turboprop aircraft through-out Alaska. Rick joined the Alaska Air Guard in 1976 as a USAF C-130 pilot, flying world-wide for 24 years, and retiring as a Colonel in 2001. In 1992 Rick hired on with United Air Lines where he has flown the B-737, B-727, DC-10, and A-320 aircraft.

Rick moved back to Southern California in 2001 flying as an A320 Captain from LAX as well as his Cessna 180 out of Torrance Airport. Rick has flown over 18,000 hours of flight time, and has always enjoyed working with airplanes and his fellow aviators. He takes pride in making all aircraft sales transactions as smooth and trouble free for the clients as possible.

The key to Rick´s success is his emphasis on full disclosure and integrity in all of his dealings.