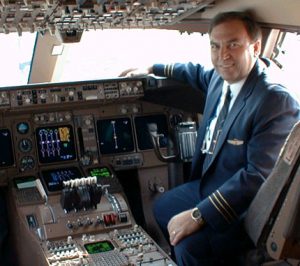 Manny Camacho is one of AirplanesUSA´s founding members. He brings a wealth of aeronautical, aviation management, and business experience to our aircraft sales company.

As a strong supporter of the aviation community, Manny can relate to most sectors of the aviation world having been directly involved with general, charter, corporate, commuter, supplemental, cargo, and commercial air carrier operations.

Manny´s first exposure to airplanes and pilots came at the age of 20 while attending college and working as an airport agent with Eastern Airlines at LaGuardia Airport in New York. He began taking flying lessons and, from then on, there was just no stopping him from pursuing a career in aviation!

To afford his love for airplanes and flying, Manny continued to work within the airline operations arena leading to various managerial positions along the way until the cockpit became his new office (minus the secretary!).

Manny´s professional piloting career has now taken him all over the world while accumulating over 25,000 hours of flight time in a wide variety of aircraft including singles, twins, turbo-props, business jets, and commercial heavy-jet airliners. He possesses type ratings in a few commercial Boeing aircraft (737, 747, 757, 767, and 777) in which he has served as either a First Officer or Captain. Manny has also flown as a Flight Engineer on the B-727, DC-8, and A-300. As a commuter pilot, he enjoyed flying the CASA 212, Cessna 402, and even the ´ol reliable DC-3!

Guiding AirplanesUSA´s customers through their aircraft sales transactions has become Manny´s passion. He also takes pleasure in openly sharing his knowledge and experiences with fellow aviators and encourages young future pilots to always pursue their dreams.

On the internet, Manny has helped to build AirplanesUSA´s presence. He strives to make “AirplanesUSA.com” different from most other aircraft brokerage websites by ensuring that it is informative, up-to-date, and user-friendly!

Manny is bilingual and regularly helps to facilitate our neighboring Latin-American customers with their aircraft needs.

As a graduate of the State University of New York with a Bachelor of Science degree in Business and Management, Manny strongly believes that the key to AirplanesUSA’s success will come by way of customer referrals and repeat business as AirplanesUSA´s customers get to experience our honesty and integrity first-hand!

Manny has owned various aircraft himself and resides in South Florida. Thanks to today’s modern technologies, Manny stays well-connected with AirplanesUSA’s customers worldwide.