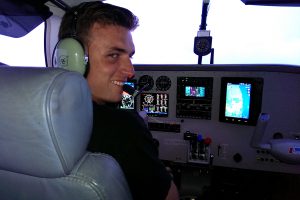 Throughout the years, Alex Camacho “shadowed” his dad, Manny Camacho, in the world of flying and aircraft sales.

Alex became AirplanesUSA´s youngest team member. His early interest in aviation made him quite knowledgeable in the field while having made some tremendous personal accomplishments along the way!

While majoring in Aviation Science at Broward College, Alex worked part-time for Spirit Airlines and later jetBlue Airways on their ramps at Fort Lauderdale International Airport. You would see Alex loading airliners and actually pushing them back from their gates at his very young age.

Alex continued to assist AirplanesUSA whenever possible as well as assisting with the general upkeep of his family´s airplane.

Alex has been primarily focused on becoming a major airline pilot. To that endeavor, he continued his aviation education at Embry-Riddle Aeronautical University in Daytona Beach, Florida while flying a variety of general aviation aircraft including some ferry flights.  He then left for Hawaii for tw0 years to fly 9-passenger Caravans between the islands with Mokulele Airlines.  He obtained his Airline Transport Pilot license and Embraer 175/195 type rating when he returned to the mainland to fly for Republic Airlines.

Just like his dad, Alex foresees himself as a mentor to others in sharing the love of flying and aircraft ownership.

We are very proud of Alex’s accomplishments and glad to have him still help represent the world´s greatest aircraft sales team, AirplanesUSA!

Alex Camacho (with dad, Manny Camacho) in a Boeing 777.

Just “hangin´ around” a 747 prior to a commute flight to Hawaii.