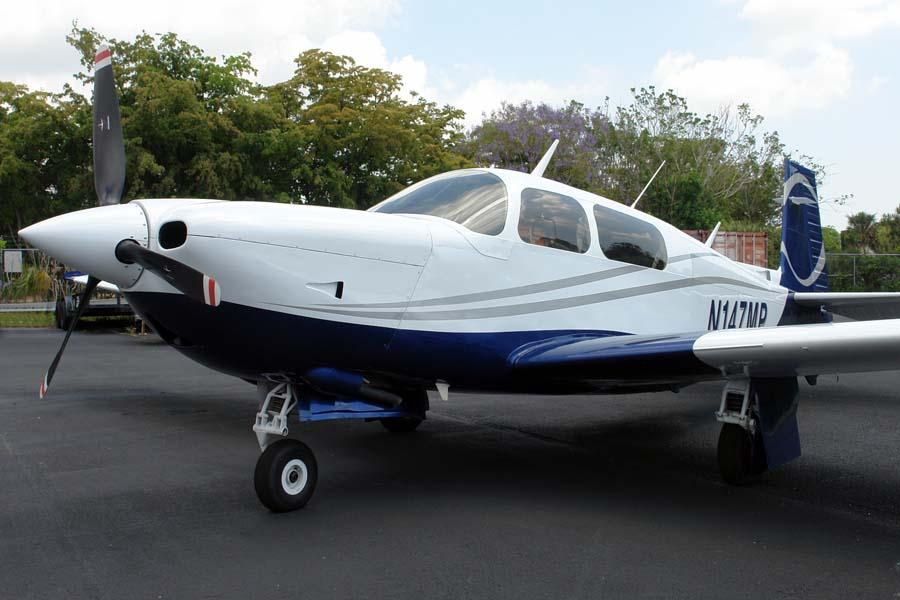 This is a GREAT deal on a Mooney!! If you seek a fast high-performance aircraft for business or pleasure and usually carry a lighter load, you'll love this aircraft!

A slice of aviation history was made when Mooney and Porsche, the German high-performance automobile maker, teamed up to produce the “Mooney PFM” aircraft. Just 41 of these fine aircraft were produced during their joint-venture.

N147MP (MP: "Mooney/Porsche") is probably the most beautiful aircraft of the entire group! It is currently owned by its 3rd gentle owner, an airline pilot, and it is in a truly immaculate condition!

In 2004, the aircraft was modified with a Mooney M20R Ovation STC conversion ($120K) and everything "firewall forward” was replaced brand new! A factory-new Continental IO-550 (280HP) engine replaced its original Porche PFM 3200 (217HP) engine while the aircraft's interior, avionics, and instrument panel were all updated. N147MP was also recently repainted with an Ovation scheme ($10K)!

You will find this low-time Mooney to have been extremely well-maintained. It has been hangared for most of its life and it now compares in looks, size (extended fuselage), engine, and general performance (except for its useful load) to the "Ovation" for just a fraction of the cost! This is a golden opportunity.

- No damage history
- All logbooks
- Next annual inspection due May 1, 2011
- Next static inspection due February, 2011
- Aircraft is located in Fort Lauderdale, Florida 33309

- Information provided is believed accurate although not guaranteed.
- AirplanesUSA always encourages proper pre-purchase inspections.
- Flight times may vary with normal aircraft utilization.
- No warrantee offered. Inquire about optional breakdown protection policy.
- Personal items in any photos are not included unless so stated.
- Aircraft may be subject to prior sale or withdrawal from the market.
- See www.AirplanesUSA.Com for the latest photos and details.

Additional Information:
- Retractable gear
- Fuel Capacity 66 gal (61 gal usable)
- A kit is available to increase the fuel capacity by 30 gals, if desired.
- Another STC is available to further increase the engine's horsepower to 310 HP.
- This aircraft has been hangared most of its life.
- Empty Weight 2225 lbs
- Useful Load is 675 lbs.
- Regarding N147MP's useful load: Mod Works of Punta Gorda, Florida completed the aircraft's Ovation STC conversion in 2004. They had not yet begun the subsequent STC to increase its maximum gross weight when Hurricane Charley severely damaged their facility and the company ceased operations. Luckily, the aircraft was not there! However, the STC was not offered afterwards and, despite the aircraft having power to spare, it's useful load could thus not be increased. It was actually reduced somewhat due to the higher weight of the new engine.
This is, nevertheless, a GREAT aircraft! Its low asking price (when compared to many of the other more expensive Mooney's) reflects the inability to take full advantage of this aircraft's true performance.
- Learn about the original Mooney PFM 3200 at http://www.mooneypfm.com/