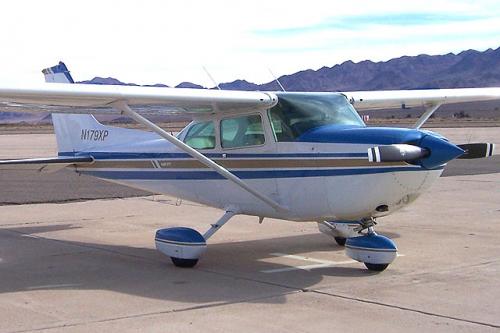 Wow! This 210 HP Cessna 172 XP is probably the lowest-time aircraft in its class with just 1700 total hours flown since new! The aircraft has been hangar-kept and is STOL, GPS, and autopilot equipped!

- Isham 210 HP Conversion
- Horton STOL kit
- Owner comments: Regarding performance with the engine upgrade: the book states “equal or better performance” but the "official" performance numbers were unaltered. Airspeed at lean cruise is around 130 knots (with 135 kts at max power). Fuel flow is 8 or less gallons per hour at cruise. The extra power is noticed during take-off and climb! Performance will continue to vary based on temperature and loading. With the STOL kit, I have flown the airplane down to 38 knots (stall warning but no drop).
- Owner is upgrading to a 6-place aircraft
- Garmin 496 (seen pictured on yoke) is not included.

The following general performance information is for the 195 HP Cessna XP.
(This aircraft´s engine was STC modified to 210 HP and will exceed some parameters although the certified weights remain unchanged)

- See AIRPLANESUSA.COM for the latest photos and details.
- Information provided is believed accurate but not guaranteed.
- Warrantees are not included
- Extended Protection Plans against any breakdowns are available.
- Flight times may vary with normal utilization.
- Aircraft is subject to prior sale or withdrawal from the market.
- Interested in listing your aircraft with us? Call Manny!